It is often thought that a false-positive rate (FPR) of 5% is somehow 'correct', because a 5% FPR is commonly used in the literature as a standard when comparing the performance of different screening tests. However, the correct FPR for your population will not necessarily be the same as the published estimates. It will depend on a number of factors, including the age distribution, which may differ from the age distribution of the standard populations used in scientific papers.

When assessing whether the FPR you observe in your screening programme is correct, that is, the one that would be expected for the population you screen, it is important to take into account the following factors which influence the FPR:-

The screen positive rate (5.0% in this case) can then be compared to the expected false positive rate for your screened population. 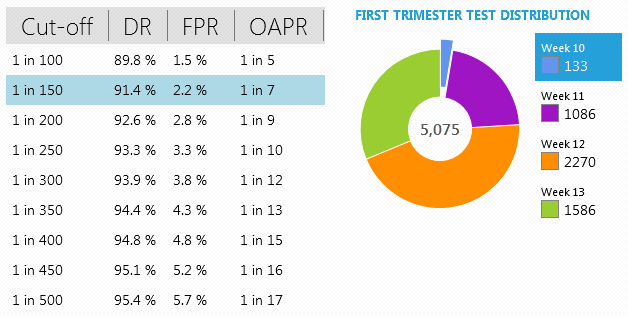 In this example, where the risk cut-off is 1 in 150, and ultrasound dating and weight correction are used in most cases, the expected screening performance is given at the intersection of the row and column indicated in the table above. The expected performance is expressed in terms of  the Detection Rate (DR), the False Positive Rate (FPR), and the Odds of being Affected given a Positive Result (OAPR).