Since 2000, αlpha has included NT features which have proved to be important and useful.  Alpha was the first screening software to introduce monitoring NT performance based on median MoM's, standard deviations and slope of NT in line with increasing gestational age.   These features help the user quantify and monitor NT measurements for individual sonographers and, where appropriate, allow for systematic measurement differences between sonographers.    The SURUSS study (Reference 1) showed  that there was about a 5 percentage point increase in detection rate when sonographer specific medians were used compared to centre specific medians.  αlpha also provides the option of using sonographer-specific medians or centre specific medians

1. αlpha  records the identity of the sonographer

αlpha allows the user to record the identity of the sonographer for each NT measurement on the data entry screen together with the other information required for the screening test on a patient.

The figure below shows how a sonographer is specified in the data entry screen.

2. Sonographer-specific tabulations of NT measurements can be made

Sonographer-specific tabulations of NT measurements include an estimate of the standard deviation of NT MoM values which can be compared with published estimates. This gives an indication of whether the precision of NT measurement is as expected.  The tabulation also includes the median NT measurements and NT MoM in each CRL group, the overall median MoM value and the tenth and ninetieth centile. The median MoM should generally lie between  in the 95% confidence interval around 1.0 MoM.  The NT standard deviation (in log10 MoM) will be less than 0.18 and the NT slope will be between 15% and 25% increase per week.

The figure below shows an example of a sonographer specific tabulation. 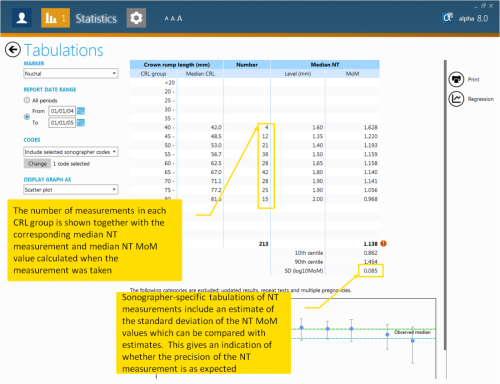 3. Coefficients of the normal median NT equation can be derived from sonographer-specific regressions

Sonographer-specific regressions of NT according to crown rump length (CRL) measurement provide an indication of the rate of increase of the median NT with gestational age. Coefficients of the normal median NT equation can be specified for each sonographer.   αlpha automatically selects the appropriate coefficients for calculating the NT MoM, based on the sonographer code entered by the user.  The observed NT measurements can be fitted to either a log-linear or sigmoid equation

The figure below shows an example of a sonographer specific regression. 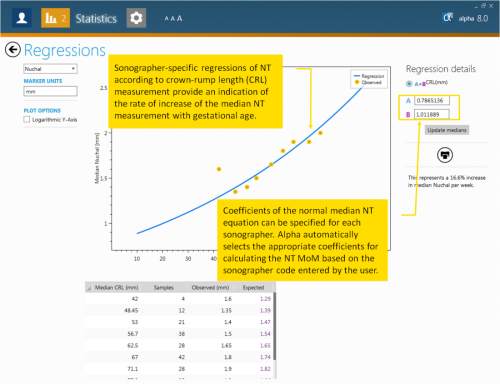 The figure below shows an example of NT measurements fitted to a sigmoid equation. 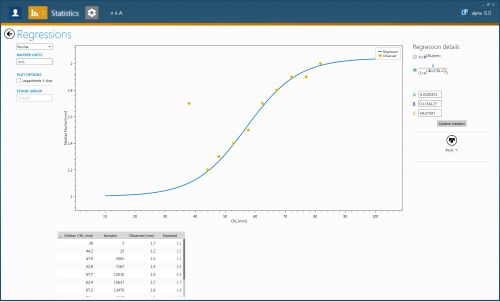 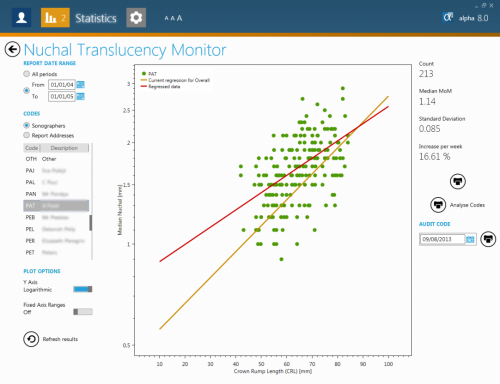 First and second trimester antenatal screening for Down’s syndrome: the results of the Serum, Urine and Ultrasound Screening Study (SURUSS) (2003)
The estimation of median nuchal translucency values between 10 and 14 weeks of pregnancy (2014)