If you change the reagents used to assay the screening markers, you will need to establish normal median values for the new reagents. Ideally, this is done by assaying approximately 200 samples using the new kit, in parallel with the old one.

Samples should preferably be uniformly distributed between the weeks, say 50 each in weeks 15-18 for second trimester markers, or weeks 10-13 for first trimester markers. Smaller numbers are acceptable in other weeks.

Having collected the measurements for the new assays, the data should be tabulated by gestational week. For each week, record the median gestational age in days, the number of samples, and the median concentration of the screening marker.

You can use a spreadsheet or database software to help with calculating the weekly medians.

For example, a tabulation for AFP might look similar to that in the table below.

Enter the data from table above into the Regression facility on the Statistics screen to derive a regressed median equation for the new kit (see the figure below). 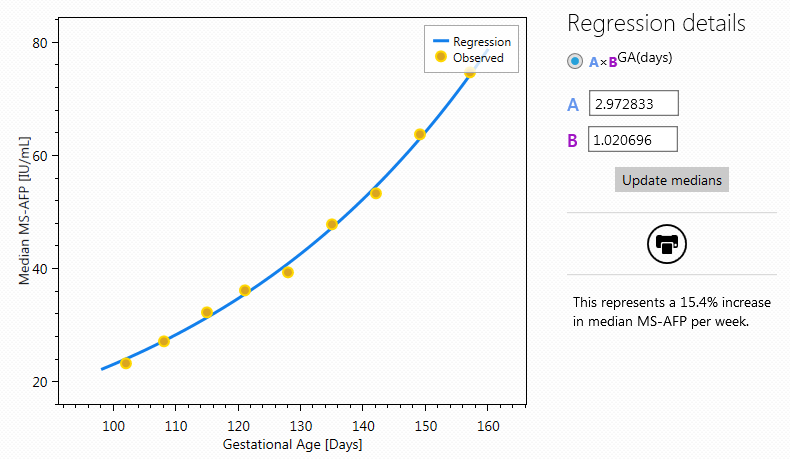 The A and B values are the coefficients of the regressed median equation. You can update the medians by clicking on the Update medians button, or enter these coefficients in to the Coefficients facility in the Setup screen.